"On the way into the forest Hansel crumbled the bread in his pocket and stopped as often as he could to throw the crumbs on the ground." 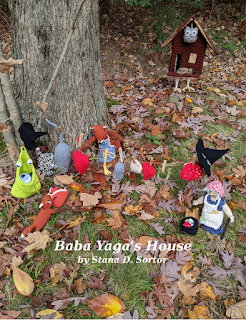 The idea for Baba Yaga’s house started many years ago when I baked a gingerbread house. I baked one only once because I realized that it is quite a messy process. However, I always wanted to knit a ginger bread house after that baking adventure.  Last year, when I finally decided to knit the house. I made a sketch and realized that it looked rather like another famous house from a fairy tale of my childhood. What I ended up producing was a rough sketch of Baba Yaga’s house with the chicken legs. 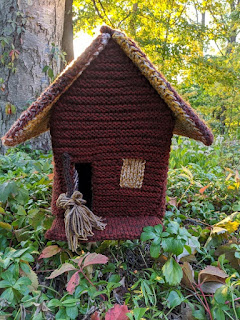 The house itself was rather plain and needed accessories and characters to fill the world of the fairy tale. There are endless characters and inspirations to be found in the world of fairy tales; this e-book is just a little slice of the fantastical world fairy tales are. As a bonus I have included a few recipes and ideas I have tried out while working on the knitting patterns and the creation of this e-book. You can purchase each pattern individually or as the e-book.

You can purchase the entire e-book on Ravelry: Baba Yaga's House

and on Lovecraft: Baba Yaga's House 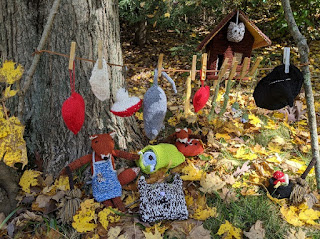 The picture bellow was taken in a castle Pernstejn that has been used to film many fairytales' movies. Visit to the castle has been on my list for years. I managed to see the castle during my last trip to see my mom, family, and friends. The photo makes me think of all that is possible if we follow our dreams and imaginations. My journey into the world of fairytales started a long time ago and hopefully will continue for some time. There is so much more to explore. 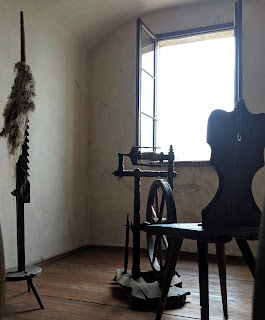 Thank you for visiting, and for reading.