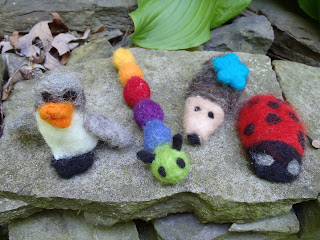 Our local library offered needle felting class.
I have never tried this before and I was curious.
At first I wasn't sure about the whole process, but I experimented.

I did not like the occasional accidents when the needle went to my flash, instead of the wool.
But overall experience was interesting enough to return to the next class.

I must admit that I still prefer the knitting needles more than the felting needles, but every once in a while (whenever the class is available at the library) I go and make a little toy.

Who knows, some of these might be a future knitted toys as well. The inspiration for my critters comes from all sorts of places. 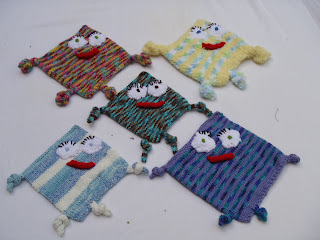 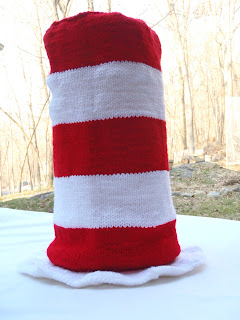 Once again, we used this Dr. Seuss Cat's hat for the raffle.

My child wanted to draw the names....

Please send me an email to crowsd@yahoo.com with contact to where to email the PDF file with knitting pattern of your choice.
Posted by Stana D. S. at 8:51 AM No comments: 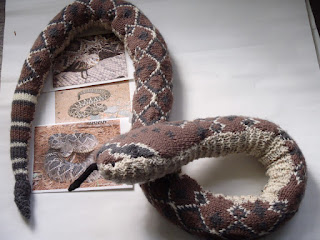 A while back I was challenged to make the Diamondback Rattlesnake. This snake was the result. I posted a photo of him on Ravelry and many people asked for the pattern.

To make this snake you have to be able to work intarsia and stranded colorwork. The stranded colorwork is done with all three colors. An easier alternative could be stranded colorwork in two colors and then add duplicate stitch for the third color. The snake is knitted flat, start at the tail’s end, work to its head, and continue with the bottom part. Rattle is added at the end.

You will need approximately 1 ball of each medium worsted yarn in brown, grey, off white for the top part of the snake and off white yarn with speckles for the bottom part. The pattern contains two charts, one for the upper body and second for the head, as well as written instruction.

The knitting pattern for the snake is available on Ravelry or could be purchased by clicking on this button. 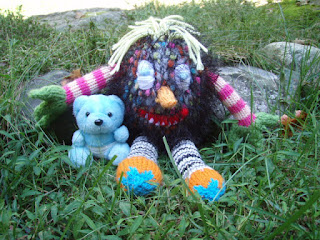 Today is a good day to celebrate.

I have written and published twenty knitting patterns.

It's a nice and round number to celebrate by having another gift away.

Two of my knitting patterns for sale - will be given to two winners.

The winner will choose the pattern they wish to  receive.

These are the rules:
I will add the names of all followers to a hat (we will use Dr. Seuss Cat's Hat again)
For the next few days (deadline is May 6th 2012) anyone's name - who leaves a comment on my blog will be added to the hat.

On May 7th 2012 the two winners will be announced.


Enjoy and Thank you for visiting.