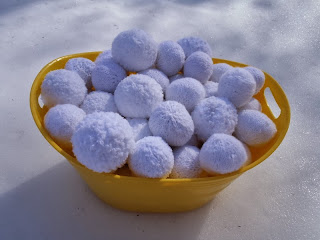 This picture shows the 101 snowballs I knitted last year. After the party was over, we gave away all of the snowballs. So I was asked to make another 100 snowballs this year. I started in January, like I did last year. But unlike last year I was not finished with knitting the snowballs by the end of February. This year I am rather slow. I missed the June deadline and I am not done knitting, yet. 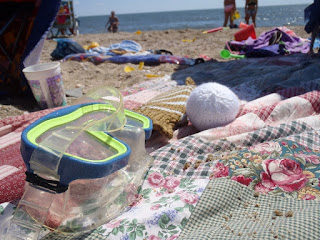 I even took the snowballs project with me to the beach. This is snowball number 64.

I hope I will be done in time for the postponed snowball fight in September. I think we might keep some of the snowballs just in case there is the request for the third celebration next year.

Once again, our local library have the summer reading program for children. The program encourages them to read. The volunteers record the time and books the children read, and for their time and participation the children receive raffle tickets. Each week there are plenty of prices to choose from.

I think that this year is my fourth or fifth year that I have donated several of my knitted toys towards the weekly prices. Each week one of my knitted toy find a new home. I see the amount of tickets in the container in front of my knitted toy each week, and I must admit it is rather enjoyable feeling to see how many children are interested in winning those handmade toys. Whenever we visit the library to pick our books, the librarians tell me all about how much joy and smiles the children had when they came to pick up their new toy.

For me personally, this is what knitting is about. The joy and happiness a handmade gift can bring.