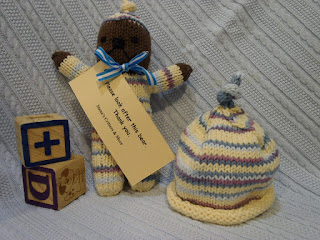 Lately it seems that I always know somebody who is expecting a baby. It's such a joyful time, for the mother to be, her family and everyone around.

I must admit I love to knit for babies. It's cute and small and very quick to make. A small baby hat and a teddy bear in matching colors is the perfect gift to give to any expectant mom to be.

Even though it may seem that I have taken a vacation from knitting pattern writing, I am still creating new critters.

Maillie, the travelling monster is friendly and has a pocket that invites to stash something inside, perhaps a picture, a photo or a love note to be discovered at the later time.

The knitting pattern will be available. 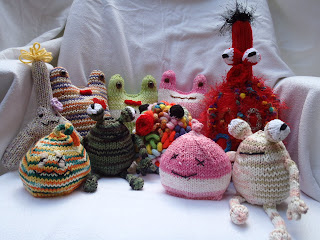 This is the portrait of the members of the monster gang.

These toys were created during the past three weeks as a part of Random Act of Monsters and Ravellenic games. The toys will travel soon to their new homes, hopefully bringing some comfort and smiles to their recipients. 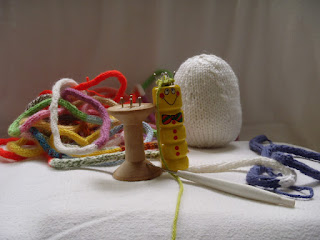 It all started when I visited a friend of mine.
She showed me the little yellow tool and told me that it's fun thing to do.
I showed the tool to my mom and she told me:  "I used to make "the worms" as a child. We would sit on a branch and compete who's string touch the ground first." So she made the other tool for herself and we both began to make the colorful strings.
Than I added the body, and googly eyes, and began to sew the strings onto the body. 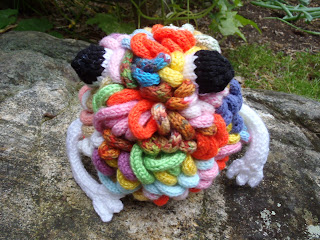 The result is Wormie.

The other members are coming up - Toadie, Blob, Jiggle and others. The members of the gang will be part of RAM (Random Act of Monsters) and all of them will go to their new home soon.

The knitting patterns for all of them will be available soon.