I also made Dandelion honey. I remember it as a special treat my mom and grandmother used to make in the spring. It feels as if each jar is filled with childhood memories, sweet and tender.
Under the normal circumstances, I would never be able to make this. It is time consuming. Collecting the dandelions (carefully picked up flower heads, with enough behind to leave for the insect to feed on), simmering in water, allowing the aroma and flavors to intensify.

In my knitting world, the first clue for Leonard and Lola was released. Second clue is coming tomorrow. See my previous post Leonard and Lola, toy mystery KAL how to join the fun.


We also have a new neighbor. Somewhere in the woods across the street lives a fox family. I keep seeing her and her four babies. It is amazing to watch them play and frolic around, while their momma is out hunting for food. I named her Frances. I managed to capture the fox babies on a video playing around. Even though I keep seeing them almost daily, my phone camera is not good enough to capture a decent close up image of them.  Bellow see the picture I took during one of my walks with the dog.


During these walks, I imagine that Frances is a single mom, busy running around trying to feed her babies. I am not sure if the father is around or what have happened, but this is what I imagine Frances might look like....
And here is their encounter with our dog...

In the real life their encounter would be rather different, and I am making sure that they only see each other from far away.

I will spend this coming week working on the knitting pattern and after the test knitting, and TE is completed the pattern will be available.

As I mentioned in my previous post, the new toy mystery KAL is about to start.

More details and the pattern to download is here:
Leonard and Lola

Don't forget to join my group on Ravelry where you can find the coupon code and where you can participate in posting the work in progress pictures and chat with fellow knitters.
Stana's Critters Etc group

In my small stay at home world I continued on my baking adventures path. I baked my tried and successful recipes, some comfort food, and I tried few new thing. After many years of being asked to try and make the sourdough bread I have gone down the rabbit hole of sourdough baking. It is a challenge and I am not sure how successful I have been. I followed the book The Bread Baker's Apprentice  by Peter Reinhart and started my sourdough adventure last Monday morning with the Day one for Seed Culture, I continued with the Barm and yesterday evening we had the first sourdough bread. The sourdough bread didn't rise as much as my usual bread I bake using the commercial yeast, but it tasted good. I guess I just have to continue and I am sure with time and practice the bread will be better and better. Just like with knitting. My first attempts were so much different from what I am knitting these days. And it also took practice and perseverance.

In my collage picture are: My first sourdough breads, Linzer cookies, Bread, Bread (I baked another), Focaccia (This time I added few thing on top to make it more interesting), Bundt Cake, Tortillas (my first time making them from scratch, they taste different from the store bought tortillas, and they were harder to use for Fajitas, but still tasted good), Ginger Bread (my mom's recipe, fast, easy and good tasting), and my Monday adventure of starting the sourdough seed culture, my bread (I baked it three times this week) and our comfort food of Chocolate Brownies (it's so good to bite into a warm, and soft chocolate brownie).

This week proved to be challenging for our garden. Last week we planted two Pear trees, Blueberry, Currant, and Raspberry bushes, and then this weekend we had a freezing temperatures overnight and it snowed. We will not know if the trees will make it through this temperature change and produce some fruit or not until late in the season.

We also had our first crop of the season. We seeded the radishes early in March, in our new cold frame, and now they are maturing, and are ready to be picked and eaten.

Yesterday, on my walk with our dog through the neighborhood I looked up and saw for a brief moment this wonderful heart shaped cloud.


I see this as a sign of hope, that we as humans will make it through this pandemic and learn to be better and kinder to each other and to the Earth especially.

Another week went by. I am not sure anymore how long I have been at home, not going to my work and not receiving a real paycheck. I am not complaining. We are lucky, so far we are healthy and my husband continues to receive his paycheck and our bills are covered so far. Life is good.
According to my weekly baking pictures I have been baking six weeks already. This week was a rather adventurous. I tried for the first time to make croissants from scratch. It was a success. I also baked brioche bread. I used the middle class brioche recipe from the book  The Bread Baker's Apprentice, by Peter Reinhart. And of course I returned to some of my favorite comfort foods and desserts.

Pictured are: Salmon Cakes, Croissants, Brioche Bread and Buns, Bread (though this time it baked in a funny shape, mushrooms?), my mom's Crepe's recipe, Fruit Salad (it is a dessert though not baked), Apple Strudel, Chocolate filled Croissants, Brownies.

In the knitting world I managed to finish a work for a third party. I cannot post pictures until after the publication goes live, but I really enjoyed knitting this project.
I also made the Mask Buddy to help with wearing the face mask and I started to work on our next toy mystery KAL. Later this week I will post more details in my Ravelry Group and add the pattern to Ravelry. I have named them Leonard and Lola, but I might change my mind.  Pictured  is the yarn I am using for my Leonard and Lola.


Across the street we have a new family. Fox mama and her cubs are living somewhere in this small piece of wood that is surrounded by houses and we are so lucky to be able to see the fox family from time to time.
I am trying to capture the little foxes on my camera, but my phone camera is not good enough to zoom in and my real camera still uses film and I have not use the camera in a long time, and it seems to be harder and harder to actually find a place where the films are still developed.  As you can see foxes are one of my favorite animals to use in my knitting patterns. 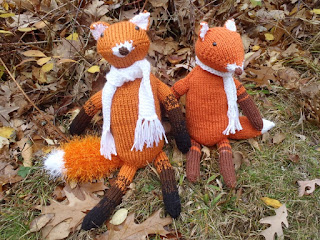 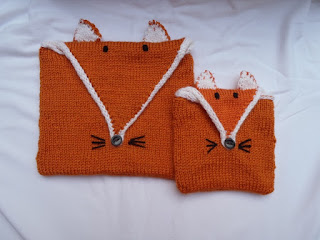 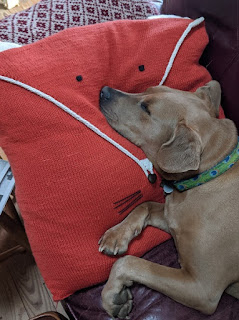 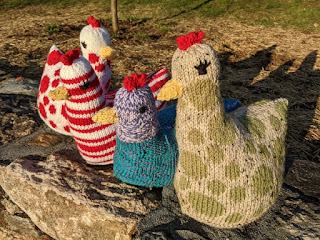 The complete pattern for these funky hens, or chickens, or some other similar kind of bird is available now in my Ravelry store, on Lovecraft, or you can purchase the pattern by clicking on this button:

This is a simple half an hour project that might help with the face mask. I have seen variety of similar things on the internet. I decided to use cotton yarn for mine and make it double to keep the mask buddy from stretching too much. These I made in less than an hour, while talking to my mom on Skype. They are for my friends, and neighbors. I will be making few more for others. A friend of mine sew the mask on her sewing machine. I have added the elastic, knitted the mask buddies, added two buttons and I have a small gift of appreciation for my neighbor. Sewing the button took me the longest, or it seemed to be.
Once this pandemic is over, you can use it as a book mark, or a needle holder.

Yarn: Cotton yarn in your favorite  color. For my sample I used Sugar and Cream yarn, I think.

Finishing:
Weave in ends. Sew the two buttons on the knitted piece. If you need to make the mask buddy longer or shorter just add or substract few rounds between the increase and decrease rounds.