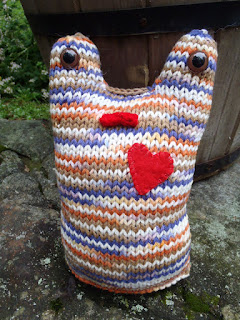 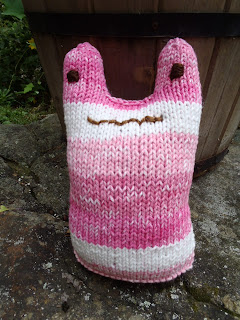 Yarn: You will need less than a ball of yarn in sport to medium worsted weight. Also you will need small amount of red yarn for mouth and black embroidery yarn for embroidering the eyes.

Abbreviations: KFB = Knit in front and back of the same st, this creates 2sts from 1st.
SSK= slip st, slip st and knit the 2sts together, this decrease 2sts to 1st.
Gauge: will vary with the yarn used.

Lips: With two double pointed needles, cast on 4sts in red yarn.
Row 1: Knit 4, then turn the work upside down, with second needle pick up and knit 4 sts along the cast on edge.
Row 2: Knit around, 4 sts per needle, (8sts total)
Row 3: *KFB, knit 2, KFB, repeat from * around, (12sts total)
Row 4: Knit and cast off from both double pointed needles at the same time. Cut the yarn, leaving long enough tail, and thread the end on a yarn needle. Sew the lips on the face of Jiggle using the picture as a guide.

Copyright: This pattern was design and written by Stana D. S. The pattern is for personal use only. The finished items may not be sold for profit, except for charity purposes. Please acknowledge the author.
Thank you.