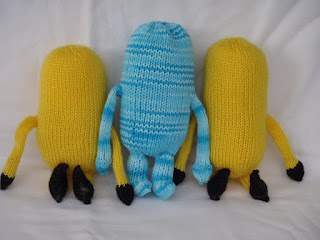 This is the first part of Knitting Pattern for Minions.
The minions will look like this when you finish knitting Part 1 of the pattern. You could leave them this way, adding some safety eyes and mouth, or you could continue with the Part 2, which will be the next post.

Yarn: Less than a ball of sport to medium weight yarn (yellow color, or color of your choice), remnants of black yarn.
Recommended Needle Size: DPN US #3/32.5mm (set of 4)
Notions: Yarn needle, crochet hook, scissors, stitch marker, polyester fiberfill (1 small bag)
Abbreviations: KFB = Knit in front and back of the same st, it creates 2sts from 1st.
SSK = slip st, slip st and knit the 2sts together. This decrease 2sts to 1st.

INSTRUCTIONS:
This Minion is knitted in the round, start at the bottom of his body, continue to top of his head. The arms and legs are sewn on.

Finishing: At this point you can embroider face on your minion, or use safety eyes. And you are done, or you can follow the Part 2 of this pattern.

Copyright: This pattern was design and writen by Stana D.S.
The pattern is for personal use only. The finished items may not be sold for profit, except for charities. Please acknowledge the author. Thank you.
Posted by Stana D. S. at 12:35 PM